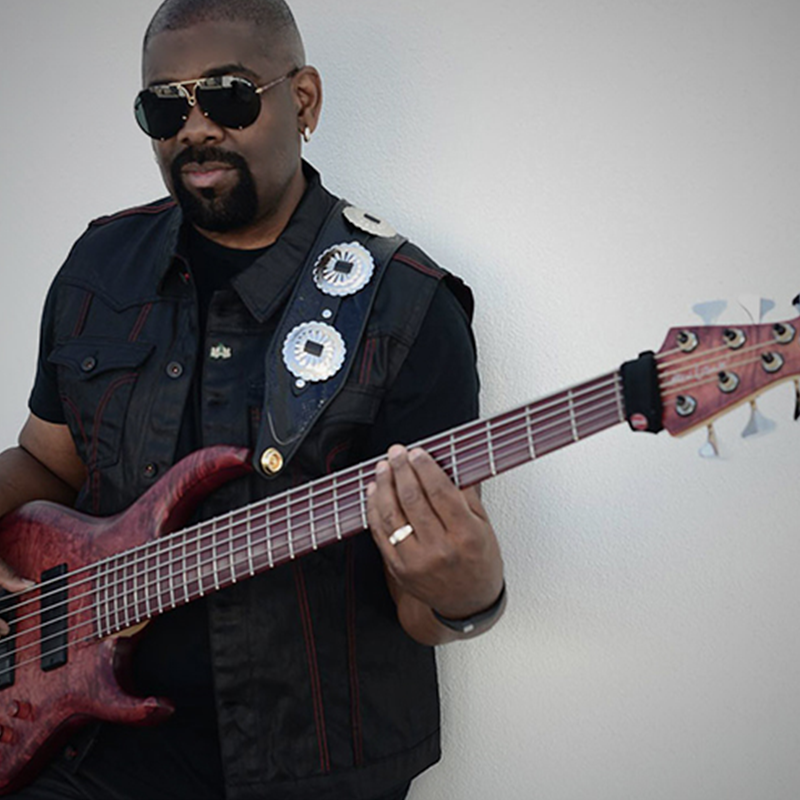 Grammy® Award winning producer Andrew Gouché has completed his long-anticipated debut album, We Don’t Need No Bass.
With over 30 years of experience as the bassist for many R&B and Gospel legends as Prince and the New Power Generation, Gladys Knight, Andraé Crouch, The Winans, and musical director for Chaka Khan, his project speaks to his Gospel roots but showcases a broader musical gift blending Jazz and R&B into a soulful variety of songs. Although a self-proclaimed church musician, Gouché shows the world with this album that he is much more, as We Don’t Need No Bass reaches out to music lovers of all ages and genres. A world-renowned bassist, musical director, producer and composer, he is best known for his creatively original bass lines and a unique sound that bass players around the world have sought to emulate. His distinctive sound is the core of the Andrew Gouché signature line of bass guitars. Having graced the cover of Bass Player Magazine and industry interviews over the years, he has been tagged as a Gospel legend. Coming from a musical family, the Los Angeles native started out singing in the church choir where his grandfather was the pastor and his mother the lead singer. At eight years old he took up the trumpet, which he played for 7 years, until he discovered the bass guitar at age 15. Then it was clear, Andrew had “truly found what he was meant to do in life.” He continued to hone his skills while playing with Rev. James Cleveland in the late 70’s on numerous live and studio recordings. International tour bookings with Andraé Crouch, The Winans and The Hawkins Family soon followed. His standout performances ushered in a new rhythm to Gospel songbooks.
A true pioneer, he has made an indelible mark on the history of Gospel music with the addition of bass guitar when there was none in church. Today, bass guitar is a must-have in churches across America.
He has paved the way and inspired today’s generation of Gospel and R&B bassists. His successful experiences in the Gospel industry eventually opened the door for his first R&B gig with Cheryl Lynn. This quickly led to a regular call for recording sessions across all genres including, but not inclusive to, Prince, Chaka Khan, Michael Jackson, Quincy Jones, Julio Iglesias, Madonna, Snoop Dogg, Warren G, Earth, Wind & Fire, Aretha Franklin, Y’anna, Hidden Beach Unwrapped Series, Jimmy Reid, LA Jazz Syndicate, Smokey Robinson, Patti LaBelle, Judith Hill, Kirk Franklin, Donna Summer, Gladys Knight, Yolanda Adams, Dianne Warren and Heather Headley. His career has also led him to play on some of the largest world stages in television and film as, Good Morning America, The Today Show, Martha Stewart Show, MTV Awards, The Tonight Show with Johnny Carson, Saturday Night Live, Soul Train, The Grammy Awards, Soul Train Music Awards, The Rosie O’ Donnell Show, Pat Sajak Show, The Keenan Show, Arsenio Hall Show, Command Performance at the White House with Gladys Knight, Sinbad Soul Music Festival, The Tonight Show with Jay Leno, The Morning Show, Diana Ross’ TV Special, Amen, Jimmy Kimmel Show, The Five Heartbeats, Leap Of Faith, The Lion King and The Color Purple, and Musical Director for 10 yrs of The Mc Donalds Gospelfest.
His professionalism, exceptional musical ear and creativity naturally evolved into music production. He found success in this arena as a contributing producer on the Mary Mary debut album Thankful when he was awarded his first Grammy® and later as a 2008 GMA Dove® Award nominee for Traditional Gospel Album, after producing numerous records for the Gospel Music Workshop of America and many other individual artists.